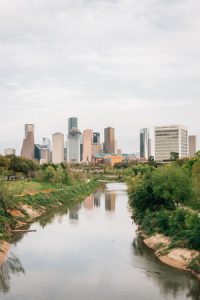 If you’re hoping to catch a home game at NRG Stadium this football season, you may need to build some extra time into your travel plans. Earlier this month, work began on a project to lengthen the Stella Link Bridge in southwest Houston, which serves as a major thoroughfare for drivers traveling in and out of NRG park.

This bridge expansion constitutes a major step forward in a plan to significantly reduce flooding along the Brays Bayou.

This plan, which was introduced in November of last year, involves widening 21 miles of Brays Bayou to provide additional flood protection to nearby neighborhoods. Once complete, Project Brays is expected to reduce the number of structures at risk of a 100-year flood from 16,800 to 1,800.

In addition to causing travel delays for Texans fans, the bridge construction may also disrupt traffic to and from the Texas Medical Center. By staggering the three bridge expansions over the course of several months, the Harris County Flood Control District hopes to keep these traffic disruptions to a minimum. Currently, the northbound side of the Stella Link Bridge is closed and all traffic has been rerouted to the southbound side of the bridge.