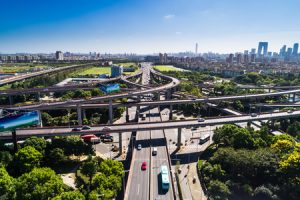 After more than two decades of construction, work on Houston’s Grand Parkway entered its final phase earlier this year. When the last section is completed in 2022, the 184-mile parkway will be the largest highway loop in the nation.

Since the idea for the parkway was first conceived in the 1960s, it has become one of the most ambitious infrastructure improvement projects ever undertaken in our region. And while the Grand Parkway was designed to accommodate increased traffic around the Greater Houston area, it could become a new corridor for residential and commercial development as well.

According to a recent article in the Houston Chronicle, a number of companies are purchasing property near the parkway with the intent of developing new homes and businesses along its route.

“The Grand Parkway has just been a tremendous catalyst,” said Kirk Laguarta, a broker for Land Advisors Organization in an interview. “all along the Grand Parkway as soon as it was announced on the west side, you saw the activity of sales occurring, of people going out and buying sites, especially where the interchanges are. Those are very critical.”

Laguarta is quick to point out, however, that although interest from developers is strong, some of their efforts have been slowed by new regulatory requirements that were implemented in the wake of Hurricane Harvey.

“all of the requirements are changing, which I think everyone would agree, needs to occur, but it’s getting the approvals now that’s taking longer.”