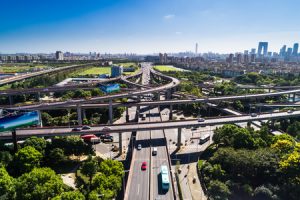 Following decades of careful planning and construction, work on the last leg of Houston’s Grand Parkway has finally begun. Once this section is complete in 2022, the 184-mile Grand Parkway will become the largest highway loop in the nation.

The last phase of parkway construction will be divided into three segments, all of which will be worked on at the same time.

This section of the parkway will stretch more than 50 miles around the northeast corner of the Greater Houston area and pass through Chambers, Harris, Liberty and Montgomery counties. According to the Houston Chronicle, construction crews will also build “74 new or substantially reconstructed bridges” and move “nearly 25 million cubic feet of earth” during the project. It’s expected to take about four years and cost $1.28 billion to complete.

Construction on first segment of the Grand Parkway started in 1994, but planning for the massive highway loop began way back in the 1960s. The final phase of construction will be funded by bond sales and Transportation Infrastructure Finance and Innovation Act (TIFA) loans.

According to the project’s description, this phase of the Grand Parkway’s construction will increase highway capacity by offering “a new tolled two-lane controlled access facility, with intermittent four lane sections for passing … four additional toll lanes from FM 1405 to SH 146 … and upgraded tolling equipment to the existing tolled four-lane facility from IH 10 East to FM 1405.”

Here at Texas Contractor’s Equipment, we’re thrilled to see this ambitious infrastructure project entering its home stretch after so many years of construction. To learn more about all the infrastructure development going on in our area, stay tuned for the latest updates from our blog!