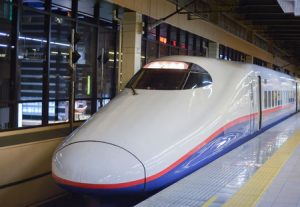 The high-speed rail line that is expected to cut the 240-mile trip between Houston and Dallas down to 90 minutes has seen significant progress in recent months thanks to the efforts of its investor-owned railroad company Texas Central. In February, the project passed a major milestone when Texas Central announced that it had negotiated with landowners to purchase close to one-third of the total land required for the route across 10 counties.

If the construction crews break ground on schedule, the bullet train could be up and running by 2023.

“This is a significant step in the progress of the high-speed train and it reflects the positive dialogue we have had with landowners along the route, said Texas Central CEO Carlos Aguilar in a statement. “Texans see the many benefits of a system that will provide a safe, reliable and productive alternative to the state’s transportation demands.”

In early May, Texas Central also announced that it will partner with Amtrak to connect the high-speed line with regional and national routes that pass through Houston and Dallas as well. This partnership could make the new bullet train a far more valuable transportation option for commuters and tourists in Texas.

If all goes according to plan, Texas will be home to one of the fastest and most efficient high-speed rail lines in the nation within the next five years.