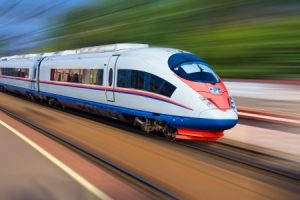 Currently, it takes about three and a half hours to make the drive from Houston to Dallas-Fort Worth on Interstate 45. Thanks to investor-owned railroad company Texas Central, however, a new bullet train could one day cut the 240-mile trip down to just 90 minutes. Once complete, the train will be the first of its kind in the country, and it will be funded entirely by private investors.

Recently, progress on the bullet train’s development passed a major milestone when Texas Central selected Fluor and The Lane Construction Corporation to refine plans for the $15 billion project. Once the planning and development phase is complete, the two companies will also be in charge of the railway’s construction. At Texas Central, the executive team is understandably excited about getting two more major players on board for the project.

“It’s huge,” said Texas Central President Tim Keith in an interview with the Dallas Business Journal. “It shows we’re ready and that we’re moving forward every day. It’s evidence that this project is attracting world-class companies and that we’re on the cusp of being the first high-speed rail in America.”

Not only will the bullet train provide Texans with a fast, efficient way to get back and forth between Dallas and Houston, it’s also expected to create 10,000 new jobs during each year of the construction process. Furthermore, 25 percent of the permanent jobs created by the project will be in rural communities along the train’s route.

Construction on the railways could begin as soon as 2018. Once it’s up and running, the bullet train is projected to generate more than $35 billion in economic benefits over the next 25 years. For the 14 million who travel between Houston and Dallas-Fort Worth each year, the state-of-the-art train could make the trip a whole lot safer and easier.