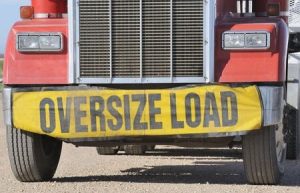 If you were driving on Houston-area roads early last week, you may have found that your ride was disrupted by an unusual caravan of trucks and state troopers escorting two massive wooden crates on flatbed trailers.

These crates – the largest of which measured 135 feet long, 27 feet high and 24 feet wide – were in the process of traveling 108 miles from Spring Branch, Texas to their destination at the Bayport Cruise Terminal. From there, the crates will embark on a month-long Journey to South Korea. Each crate contains components for a new mobile drilling platform which will be constructed upon arriving at the Korean Peninsula in September.

As you might imagine, the historically-huge heavy haul required a great deal of logistical planning and preparation.

During the journey, utility crews had to disconnect power lines and traffic signals at intersections to make room for the crates as they crawled closer to their destination. Towards the end of the caravan’s ride through Houston, a portion of I-45 had to be closed for several hours as well. The crew of more than 100 workers moved the crates primarily at night to avoid major traffic disruptions, but the trip was not entirely without incident. At one point in the haul, two motorcycle officers were injured when a suspected drunk driver blew through a blocked intersection and hit them.

Despite slowdowns and setbacks, the crates reportedly arrived safely at their destination in Bayport, Texas late last week. Now, they’ll be loaded onto a ship so they can continue on their trip around the world to South Korea.