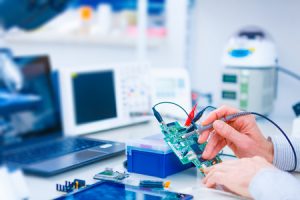 Labor shortages have made it increasingly difficult for construction companies to meet tough deadlines in recent years, but new advances in robotics could allow crews to work faster, safer and more efficiently. Thanks the efforts of America’s robotics engineers, machines are beginning to lend a hand with some of the industry’s dirtiest, most dangerous jobs.@

In a recent article in The Houston Chronicle, the founder of a robotics company based in San Francisco described how his team is developing autonomous bulldozers, excavators and other pieces of heavy equipment that eliminate the need for human operators. Meanwhile, in Colorado, a bricklaying robot called the Semi-Automated Mason (SAM) is helping construction crews by laying about 3,000 bricks in an eight-hour shift. Although some economists have raised concerns about these robots replacing humans in the labor market, others have argued that the machines are simply shifting the demand for people in other positions.

“We need all of the robots we can get, plus all of the workers working, in order to have economic growth,” said Michael Chui of the McKinsey Global Institute in his interview with The Houston Chronicle. “As machines do some of the work that people used to do, the people have to migrate and transition to other forms of work, which means a lot of retraining.”

The construction workers using SAM in Colorado, for example, spent weeks learning the skills they needed to operate and maintain the bricklaying robot. Furthermore, experienced bricklayers are still needed for more complex jobs that automated machines like SAM can’t handle on their own. Rather than replacing these skilled laborers, construction robots are taking care of tedious or otherwise undesirable tasks, thereby allowing humans to put their brains and hands to work elsewhere. These robots could even help construction companies reduce their insurance costs by performing hazardous tasks that are prone to causing workplace injuries.

So keep an eye out – before too long you might spot robots helping out at a construction site near you.