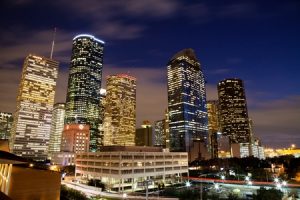 For the past four years, the old Barbara Jordan Post Office has sat vacant on the northern end of Downtown Houston. Soon, however, the massive monument of modernist architecture will receive a new lease on life thanks to an ambitious adaptive-reuse project that’s being spearheaded by current property owner Lovett Commercial.

In late June, Lovett Commercial unveiled the highly-anticipated plans for POST Houston, a dramatic redesign of the 16-acre complex that will include workspace, restaurants, a hotel, retail space, a concert venue and a rooftop park and garden. Rather than demolish the old post office, architecture firm OMA New York will integrate its new design into the existing structure.

“A lot of these mixed-use projects are actually what would be considered adjacent-use projects, in the sense that the way that the different programs interact with each other is still distinct and disparate, whereas our vision for POST is about a melting pot of programs that cross-penetrate and influence each other,” said Lovett Commercial Project Manager Kirby Liu in a recent interview.

For example, project developers envision a future where restaurants in POST Houston will be able to source their fruits and vegetables directly from the complex’s rooftop garden, called Skylawn. OMA also plans to open up three sections of the building, creating new atriums with elaborate staircases that connect the various levels of POST Houston. Each of these atriums will be covered with a translucent ethylene tetrafluoroethylene (ETFE) roofing material that insulates the space, acting like a huge air-filled Ziplock bag.

With such a diverse collection of attractions occupying more than 550,000 square feet of space, POST Houston is sure to become a new landmark in the city’s theater district. The first phase of the project is expected to be complete by summer of 2020.